Victims of violence in Congo share their grief with pope

The three of them and other victims of violence in eastern Congo told Pope Francis horrifying stories of watching their families be slaughtered or of being kidnapped or raped repeatedly by militia members.

Pope Francis had planned to go to Goma in the violence-torn North Kivu province, but increased fighting forced him to cancel the trip to the East to protect the crowds that would gather to see him.

Instead, the pope invited about 40 victims of violence in the East to the apostolic nunciature in Kinshasa Feb. 1.

Ladislas Kambale Kombi, 16, said he watched his father being hacked to pieces with a machete and his mother being kidnapped, leaving him alone with his two little sisters. "Mom hasn't come back. We don't know what they did with her."

Léonie Matumaini, an elementary school student, said she watched militia members stab her family; then, she said, they gave her the knife and dared her to bring it to the army.

Kambale Kakombi Fiston, 13, was kidnapped and held for nine months. He asked the pope to pray for children still captive in the forest.

Bijoux Mukumbi Kamala, holding one toddler and with another strapped to her back, stood in front of the pope as a friend read her testimony because she does not speak French. The 17-year-old said her "Calvary" began in 2020 when rebels kidnapped her.

"The commander chose me. He raped me like an animal. It was an atrocious suffering," Bijoux wrote. "He raped me several times a day, whenever he wanted, for hours. This went on for 19 months -- one year and seven months."

When she and another young woman escaped, she was pregnant. "I have twin daughters who will never know their father."

Father Guy-Robert Mandro Deholo read a testimony prepared for the meeting by Désiré Dhetsina "before she disappeared without a trace a couple months ago."

She had survived the rebel attack Feb. 1, 2022, on the Plaine Savo displacement camp near Bule and, she wrote, she had seen "the savagery: people cut up like butcher's meat, women disemboweled, men decapitated."

Maiming is not uncommon, Father Mandro Deholo told the pope, holding up his left hand, which is missing a finger. As he spoke, two women in the audience raised their arms -- one was missing a hand, the other was missing both. The priest accompanied the two women up to the pope, who touched their mutilated stumps and laid his hands on their heads in blessing.

On their behalf, the priest laid an axe at the foot of the crucifix placed near the pope.

Emelda M'karhungulu also had a friend read her testimony about what began on a Friday night in 2005 when she was kidnapped by armed men and "kept as a sexual slave and abused for three months."

"They made us eat maize meal and the flesh of the men they killed," she said. Those who refused were killed and fed to other hostages.

And, she said, "they kept us naked so we wouldn't run away."

"We put under the cross of Christ the clothes of the armed men who still strike fear in us because of the countless heinous and unspeakable acts of violence they continue to this day," she said. "We want a different future. We want to leave behind this dark past and be able to build a beautiful future. We demand justice and peace."

The testimonies, Pope Francis said, leave listeners without words. "We can only weep in silence."

But he did use the meeting to express his closeness to all the people disappointed that he was not traveling to Goma and, especially, to "condemn the armed violence, the massacres, the rapes, the destruction and the looting" that continue to sow terror in the lives of the people of Congo.

"Put away your weapons, put an end to war. Enough," he told those responsible.

In a country where sexual violence is a common weapon of war, Pope Francis offered special words of consolation to women and girls and strong warnings to those who would target them.

"I pray that women, every woman, may be respected, protected and esteemed," he said. "Violence against women and mothers is violence against God himself, who from a woman, from a mother, took on our human condition."

Later the pope welcomed to the nunciature representatives of six Catholic charitable programs working in the country, including programs run by the Focolare Movement and by the Community of Sant'Egidio.

The witness of helping others without expecting anything in return and of working with them to identify real needs and long-lasting solutions is something the nation needs, the pope said.

"Those who are prosperous, especially if they are Christians, are challenged to share what they have with those who lack the bare necessities," the pope said. "This is not a matter of benevolence, but of justice. It is not philanthropy, but faith. For, as Scripture says, 'faith without works is dead.'" 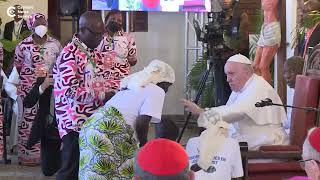 In Congo, pope listens to victims of violence

In Congo February 1, Pope Francis heard horrifying stories of victims of violence watching their families be slaughtered or of being kidnapped or raped repeatedly by militia members in the eastern part of the country.

WASHINGTON - On January 30, the U.S. Department of Health and Human Services (HHS) issued a proposed rule to reduce and, in part, eliminate legal protections from the “contraceptive mandate” for those who have religious or moral objections to facilitating sterilizations or the use of contraceptives and abortion-inducing drugs. In response, Cardinal Timothy M. Dolan of New York, chairman of the U.S. Conference of Catholic Bishops’ (USCCB) Committee for Religious Liberty, issued the following statement:

“It has been over a decade since the federal government first announced the HHS contraceptive mandate. The version of regulations that was issued in 2018 provided appropriately clear and robust protections for the exercise of religious beliefs and moral convictions, free from government punishment, and has been upheld by the Supreme Court. But HHS is now proposing to amend them yet again. It is past time for HHS to leave well enough alone in this regard.

“While we are pleased that the proposed regulations appear, at this early stage of review, to retain the bulk of the existing religious exemption, their elimination of protections for moral convictions is disheartening. The proper reaction to the Supreme Court’s decision in Dobbs is not, as the proposed regulations claim, to make it free for women to sterilize themselves, but rather to relieve the burdens that our laws and culture place both on mothers and those who may become mothers.

“We regret that it is necessary to revisit this matter and will file more thorough comments with HHS at the appropriate time.”

More information on the HHS contraceptive mandate, the USCCB’s previous comments on this rulemaking, and other regulations impacting religious freedom is available at www.usccb.org/do-no-harm.

WASHINGTON - Pope Francis has appointed Most Reverend Mario E. Dorsonville, auxiliary bishop of the Archdiocese of Washington, as Bishop of Houma-Thibodaux. The appointment was publicized in Washington, D.C. on February 1, 2023, by Archbishop Christophe Pierre, apostolic nuncio to the United States.

The biography for Bishop Dorsonville may be found here.

The Diocese of Houma-Thibodaux is comprised of 3,500 square miles in the State of Louisiana and has a total population of 257,423 of which 81,512 are Catholic.

Cardinal Fridolin Ambongo, Archbishop of Kinshasa, tells Pope Francis at the end of Mass that his visit to the Democratic Republic of Congo is a "sign of love" for the people of the DRC and an encouragement to hold "free, transparent, inclusive, and peaceful elections" later in the year.

Saint Brigid was born Brigit, and shares a name with a Celtic goddess from whom many legends and folk customs are associated. There is much debate over her birthparents, but it is widely believed her mother was Brocca, a Christian baptized by Saint Patrick, and her father was Dubthach, a Leinster chieftain. Brocca was a slave, therefore Brigid was born into slavery. When Dubthach's wife discovered Brocca was pregnant, she was sold to a Druid landowner. It is not clear if Brocca was unable to ...

"Catholic and African" - The Zaire Rite

As Pope Francis continues with his visit to the Democratic Republic of Congo, Vatican News speaks to an expert on the Zaire Rite, the liturgy developed specifically for use in that country.

In the Democratic Republic of Congo, “the laity have always understood that the Church and the nation are everybody’s business.”

Following Pope Francis’ Apostolic Journey to the Kingdom of Bahrain in November 2022, ‘The Bahrain Declaration’ promoting interreligious dialogue and peace holds its official European launch at a Gala event in Rome.

The miracle of water and the Missionaries of Africa

Ensuring access to clean water is a constant challenge in a megacity like Kinshasa, the capital of the Democratic Republic of Congo, and in some outlying districts, the State is simply unable to do so. In the commune of Kisenso, a parish run by the Missionaries of Africa oversees a “water project” which allows local people to access the precious resource without having to walk for miles.

The communications minister for the DRC notes that “millions of Congolese lined the streets” to welcome the Pope, and praises his speech calling for peace.