Oceania Continental Assembly for the Synod begins on Sunday

Two Continental Assemblies for the Synod on Synodality begin on Sunday February 5. Representatives of the Episcopal Conferences of Europe and Oceania will be joined by other members of the faithful to conclude the Continental Stage of the Synod.

"Santi subito" - Saints at once, written on a banner in red and blue on a white background, with the images of Blessed Anuarite and Bakanja. This inscription, seen on Thursday, 2 February, at the Martyrs' Stadium where Pope Francis met with young people and Catechists, is meant to be a profound wish and a prayer for the canonisation of these two Congolese martyrs, beatified in 1985 and 1995 respectively.

Sr Margaret: Education helping in the development of South Sudan

For almost 15 years, Sister Margaret Scott and other sisters of various congregations have been working in South Sudan, helping to develop the world's youngest nation by giving a future to young people through the training of teachers.

Fighting has killed 27 people ahead of Pope Francis' arrival in South Sudan for an ecumenical pilgrimage with the Archbishop of Canterbury and the Moderator of the General Assembly of the Church of Scotland.

Pope Francis concludes his Apostolic Journey to the Democratic Republic of Congo, as he boards his the papal plane bound for his long-awaited ecumenical pilgrimage in South Sudan.

The Mission Promoter of "Solidarity with South Sudan", Father David Gentry, paints a a fresco of a nation in dire need of comfort, closeness and hope, as Pope Francis begins his Apostolic Journey to the East African nation.

Pope to DRC Bishops: Be prophets of reconciliation and peace

Pope Francis meets with the Catholic Bishops of the Democratic Republic of Congo, and urges them to recall that God is close to them in their ministry to be prophets for the Congolese people.

Video highlights from Pope Francis’ third day in the Democratic Republic of Congo, during which he held a lively encounter with young Catholics and catechists, encouraged local Church ministers in their mission, and met with Jesuits serving in DR Congo.

Pope Francis sends a message to the world’s religious men and women for the World Day for Consecrated Life, and highlights the importance of their rich charisms on behalf of the mission of the Church.

'The future is in your hands,' pope tells Congolese young people

KINSHASA, Congo (CNS) -- The hands that will save Congo and build a future worthy of its people belong to the Congolese people, to each one of them, but especially the young, Pope Francis said.

The country still struggles to find stability, peace and a way to ensure that its vast store of natural resources benefit the Congolese people and not primarily foreign governments or the multinational corporations that extract the minerals and gems and leave behind little more than a scarred earth.

Pope Francis asked people in the crowd to open their hands and look at their palms.

"God has placed the gift of life, the future of society and the future of this great country in those hands of yours," he said. "No one has hands just like yours, and that is a sign that you are a unique, unrepeatable and incomparable treasure. No one in history can replace you."

Even in a very complicated political and social situation, where poverty and violence literally take lives every day, Pope Francis told the young people, "Ask yourself, what are my hands for? For building up or for tearing down, for giving or for grabbing, for loving or for hating? Notice how you can squeeze your hand, closing it to make a fist. Or you can open it, to offer it to God and to others."

"Young people, you who dream of a different future, from your hands, tomorrow can be born," he said; "from your hands, peace so lacking in this world can at last come about."

UNICEF has estimated that 67% of Congo's population is under the age of 25.

David Bode Nguamba, chosen to speak to the pope on behalf of the young people, told him their lives are challenged by war and violence, which disrupts education and sometimes includes forced conscription into armed militias, unemployment and tensions, even hatred, between ethnic groups.

"The dowry system sometimes risks becoming the buying and selling of women for the economic benefit of her family," he said. "Young women are culturally discriminated against even though often they are the ones who carry the weight of their families."

Pope Francis peppered his speech with ad-libbed advice -- "When you are discouraged, pick up the Bible and look at Jesus; he will give you strength" -- and prods meant to rouse a crowd that already was excited. A veritable roar followed his request to "repeat after me: Stop the spread of corruption!"

Hands also must be used for prayer and healing, he said.

"Dear friends, to create a new future we need to give and receive forgiveness," the pope told them. "That is what Christians do: they do not merely love those who love them, but they choose to halt the spiral of personal and tribal vendettas with forgiveness."

Pope Francis told the catechists that they, too, have an important role in building up the Congolese Catholic community and the whole society.

According to Vatican statistics, close to 77,000 catechists serve the church in Congo. Bishop Timothée Bodika Mansiyai of Kikwit, president of the bishops' commission for laity, told Pope Francis that in the cities the catechists instruct young people and prepare them for the sacraments, but in villages without priests, they lead Catholic communities.

Olivier Buluza Onkon, speaking on behalf of the catechists, said that in Congo and throughout Africa whether the life of faith is transmitted or blocked depends, "in large part, on the witness, zeal and preparation of catechists."

"It is a beautiful thing to serve others, to care for them, to do something without expecting anything in return, as God does with us," the pope said. "I would like to thank you, dear catechists: for so many communities, you are as vital as water; always help them to grow by the integrity of your prayer and your service. To serve is not to sit idly by; it is to get up and go."

The choice to open one's hands in service of God and neighbor is as old as humanity, the pope told the crowd.

"All of you, together, leave behind the pessimism that paralyzes," he pleaded. "The Democratic Republic of Congo expects from your hands a different future, for that future is in your hands." 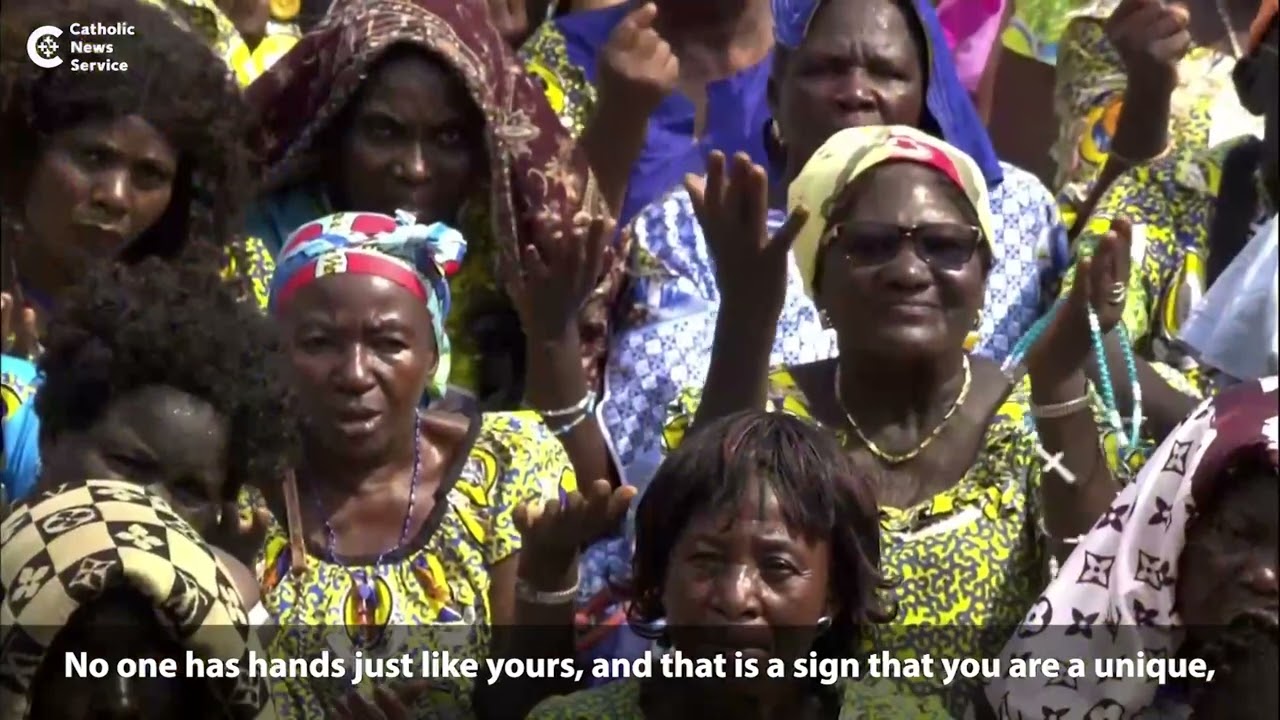 Pope Francis met with Congolese young people and with catechists at Martyrs Stadium in Kinshasa Feb. 2.